Back in September Wright Vigar held their first annual Charity golf day at Blankney Golf Club. With around 70 players attending the event proved to be a real success, raising £1000 for their chosen charity which was the YMCA Lincolnshire. 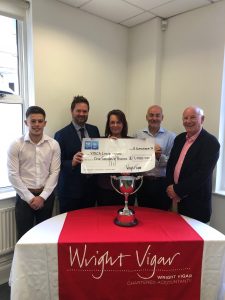 This will support them in celebrating their 150 year anniversary, with key local initiatives such as the opening of the new day centre in Lincoln.

The windy weather conditions were dealt with well and the teams posted some great scores. It proved to be a close competition, several individual prizes were won, and it was Tim Meagher’s team who finished first in the team competition, taking home the Wright Vigar cup. They were closely following by JCH investments in second and Welton Aggregates in third.

Wright Vigar would like to thank everyone who supported the day.