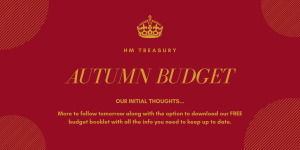 As ever the budget speech opened with a lot of rhetoric, and a great many facts and figures. The OBR has predicted that the economy will reach pre-Covid levels by the end of this year with growth predictions revised up from 4% to 6.5%.  However, there was a warning that inflation was at 3.1% in September and expected to average 4% next year. Mr Sunak said that the pressures were global in nature and impossible for us to address alone.

What about changes to tax?

The chancellor said that he would make business rates fairer and more timely by introducing 3 year revaluations starting from 2023. He also announced a number of reliefs as follows:

In terms of corporation tax, the Chancellor was unrepentant about the proposed introduction of a higher 25% rate from April 2023, but he extended the temporary increase of the Annual Investment Allowance to 31 March 2023.

Mr Sunak said that R&D tax relief was not working as it should. The relief should reflect how businesses conduct research in the modern world and so he is extending the definition of qualifying expenditure to include cloud computing and data costs.

However, there is a mismatch between the amount of R&D being claimed and the level of UK investment in R&D leading him to believe that we are subsidising R&D that is not happening here in the UK. From April 2023 therefore he said that the UK R&D tax relief system would incentivise greater investment here at home.

Pubs and bars will benefit from a new “draught relief” from 2023 cutting duty on beer and cider sold in pubs. There will also be a small producers’ relief, to ease the impact on alcohol duties on beer and cider. In the short term, the planned increase in duties has been cancelled to assist the hospitality industry.

The time limit for reporting sales of UK residential property by individuals, trustees and personal representatives was set at 30 days from April 2020.  This did not allow sufficient time to gather the relevant information to complete the calculation.  Following lobbying by a number of professional bodies, the time limit has been extended to 60 days.

The planned increase in fuel duty has been cancelled, benefitting businesses and individuals alike.

The national minimum wage will be increased to £9.50 per hour from April 2022.

A new domestic band of air passenger duty will be introduced in April 2023 to lower the tax on domestic flights. At the same time a new higher band will been introduced for flights of over 5,500 miles.

The chancellor insisted that by the end of this parliament he wanted taxes to be going down, not up. Let’s hope he gets his wish.