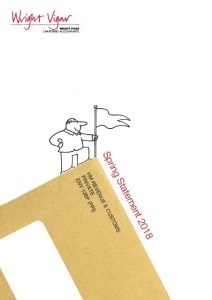 The Chancellor has presented his first Spring Statement to Parliament.

As expected, the Statement did not include any major tax or spending changes – these will be dealt with in the main Budget in the Autumn.

Instead, the Spring Statement gave a summary of the overall health of the economy together with forecasts by the Office for Budget Responsibility and an update on progress made since Autumn 2017, for example with regard to plans to tackle the UK’s housing challenge.  The Chancellor advised that the economy has grown for five consecutive years and exceeded expectations in 2017.

The Spring Statement announced that the next business rates revaluation which was due in 2022 will be brought forward to 2021.

The Chancellor also invited views on some proposed future changes to the tax system.  These include:

Overall, the Chancellor was positive about the state of the economy and signalled the easing of austerity.

If you would like to discuss any of the changes announced in the Spring Statement in detail please contact  one of our specialist Tax Team at your local office by calling 0845 880 5678, or email action@wrightvigar.co.uk

Don’t forget to pop back onto our Treasury Updates page tomorrow morning for our easy to read and informative Spring Statement Booklet which is in an easily downloadable format.