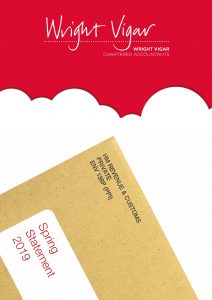 It has to be said that the timing of the Spring statement was unfortunate. As expected, Fiscal Phil gave an update on the health of the economy and the Office for Budget Responsibility forecasts. However, coming between the vote in which Theresa May’s withdrawal deal was rejected and tonight’s free vote on a no-deal Brexit, it is not surprising that the ‘B’ word came up more than once in Mr Hammond’s speech.

Right at the beginning of his Spring statement speech Mr Hammond stated that “Last night’s vote leaves a cloud of uncertainty over the economy” and he went on to say that a no deal Brexit would deliver a reduction in the UK economy’s productive capacity.  In case there was any doubt about the outcome he is hoping for from tonight’s vote, there were hints that there could be a spending boost for public services if an orderly withdrawal was achieved, paid for from money set aside to deal with the disruption of a no deal Brexit.

However, Mr Hammond did try to paint a picture of Britain at the forefront of technology allocating £200 million in cutting edge infra-structure, and other amounts to specific digital projects across the country. He also reaffirmed the government’s commitment to Housing and Clean Growth.

We did not expect and did not get any tax give-aways, but for small businesses, he promised to tackle the scourge of late payments, requiring audit committees to review and report on the payment performance of listed companies in their annual reports.

A spending review is planned for later this year and provided a Brexit deal is agreed, Mr Hammond has indicated that he will start this review before the Summer recess, with the aim of concluding it before the Autumn Budget.  Whether he will be the Chancellor to deliver it remains to be seen.

Don’t forget to pop back onto our Treasury Updates page tomorrow morning for our easy to read and informative Spring Statement Booklet which is in an easily downloadable format.