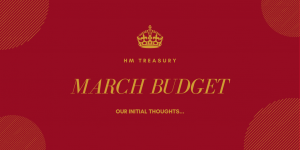 Given that the news has been full of dire warnings about the impact of COVID-19 on the health of individuals and businesses in the near future, it was perhaps no surprise that Rishi Sunak launched his first budget speech with his plan for security today before he allowed himself to explain his plans for prosperity tomorrow.  However, one thing that all of those plans appeared to have in common was our new chancellor’s apparent ability to throw money at them.  The response fund for Coronavirus has been initially set at £5 billion, but he also announced £40 million of new funding for research into the virus and said more than once that the NHS could have whatever it needed to combat the virus.

Also cunningly linked to the current worries about the Coronavirus was a substantial increase in the thresholds for calculating the tapered annual allowance for pension contributions.  The government’s stated policy objective is to ensure that pensions tax relief is fair, affordable and sustainable, but as highlighted by the chancellor in his speech, the most publicised effect of the tapered annual allowance has been to cause consultants and GPs to refuse extra shifts to avoid  the resulting pension related tax bills. The threshold has now been increased by £90,000, which removes anyone with income below £200,000 from the effects of the taper. The minimum annual allowance however has been reduced from £10,000 to £4,000.

There were no tax cuts announced for the majority of individual taxpayers.  The rates of income tax, personal allowance, income tax bands and the dividend allowance and rates all remain the same for 2020/21 as they were for 2019/20.  However, if you are required to self-isolate, you can do so with a glass of wine, beer, cider or spirits, as the duty has been frozen on all of these.  I would say that you could also enjoy your favourite book or newspaper online, but the zero rate of VAT on e-publications announced will not be implemented until 1 December 2020.